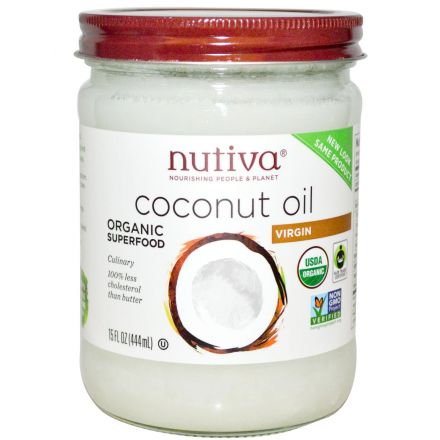 * Other brands wait more than 10 hours between chopping the coconut and pressing the oil, adversely affecting flavor.

How virgin coconut oil is processed is the key to optimizing its taste, texture, color, and aroma.

Coconut oil is about 50 percent lauric acid, a rare medium-chain fatty acid found in mother's milk that supports healthy metabolism and is now being studied for its anti-fungal, anti-viral, and anti-bacterial, health-protecting properties. Overall, coconut oil contains 92% saturated fats, and only 1% Omega-6, the fat Americans get way too much of.

The benefits of Virgin Coconut Oil

Since the 1960s, coconut oil has been unfairly labeled as "unhealthy". The media reported studies of how tropical coconut oils were laden with artery-clogging saturated fats. What was left out of these reports was the fact that the coconut oil used in the studies was not the virgin oil used for centuries, but rather hydrogenated coconut oil.

We have since learned it's the hydrogenation -- artificially adding a hydrogen molecule to oil in order to make it shelf-stable -- that's the problem, not the coconut oil itself. Hydrogenated soy, corn, and canola oils -- loaded with dangerous trans-fats and processed with toxic hexane solvents -- are routinely added to packaged foods. Hydrogenation fattened corporate profits and American waistlines, and is now linked with trans-fats and associated heart disease.

Baby formulas often include pure coconut oil as an ingredient because coconut is such a healthy super food. Virgin coconut oil is rich in the essential fatty acids, the "good fats" that doctors recommend and is cholesterol - and trans-fat-free.

One of the "good fats", which makes up about 50% of coconut oil, is lauric acid. Lauric acid is a rare medium-chain fatty acid found in mother's milk. It is now being shown to have anti-fungal, anti-viral, and anti-bacterial, health-protecting properties. Some researchers predict that lauric acid will one day become as well known in health circles as Omega-3 is today.

As studies reveal the downsides of consuming too many Omega-6 vegetable oils with their saturated fatty acids, coconut oil is making a comeback. We suggest consuming 3 tablespoons of extra virgin coconut oil per day.

The FDA started requiring the labeling of "trans fats" in 2006, and as a result, the entire fat category is undergoing a review of its traditions and assumptions. Hemp and coconut oil products deliver the nourishing "good fats", which can play a vital role in our health. Millions of Americans are questioning the outmoded assumptions regarding "zero fat is good", "tropical fats are bad", and "lots of vegetable oils are beneficial".

The traditional Pacific Islander diet included large quantities of coconut meat and oil, and those who still follow this diet have a low incidence of heart disease or weight issues. When a Western-style diet including vegetable oils replaces their traditional, all of the fat-related diseases common in the developed nations, such as coronary heart disease begins to appear, their immune systems get weaker and serum cholesterol levels go up.

Besides its nutritional value, pure coconut oil also makes a luscious and soothing massage and body oil for dry and/or damaged skin. 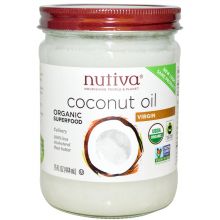